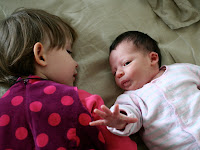 For about ten days before Isabel was born, I was having pre-labor symptoms that would start and stop – Braxton-Hicks contractions, some crampiness, nausea, and a general feeling of all systems being “go.” But labor itself kept not coming! Although I was at only 38.5 weeks, I started getting pretty impatient. When are you coming, baby? On the evening of August 31, I went for a walk and the pre-labor symptoms started up, as usual. This time, though, there seemed to be a little amniotic fluid coming out as well. This got my hopes up that maybe today was “the” day, after all.

Coming home, I began listening to my Hypnobabies (hypnosis for birthing) CDs on my iPod. I’d been listening to these CDs for the past two weeks, training myself to relax during labor and let it happen. The CDs made me feel calm and peaceful, as well as focused on the task at hand. Jacob, in the meantime, was packing the bag I would take to the Birth Center. Everything was going smoothly, until the pre-labor symptoms suddenly stopped – just as they had so many times before. I just sighed, turned off the iPod, and told Jacob it was all off, once again: “This baby will just not make up her mind!” We went to bed, as usual, at 11 pm.

This time, though, things turned out differently. I woke up at 1:20 am certain that I was in labor. Big, fairly intense waves of contractions (“birthing waves,” as my CDs called them) kept coming over me. I got up, sat on the couch in the living room and listened to my CDs some more, observing what was happening in my body. I tried to maintain a peaceful mood, slowly moving around the house in between the contractions, gathering the stuff for the bag that Jacob and I had given up on. Around 2 am, I called Tara. I told her that things were finally happening, and she said she would be right over. In about half an hour, Tara and I were sitting on the couch together. During each contraction, I would just get quiet and close my eyes, breathing deeply and evenly. In between contractions, I was fairly social and chatty. Tara brought me some food and drink. After about an hour of hanging out, Tara suggested that we try to get a bit more rest, since we didn’t know how many more hours lay ahead of us. She lay down on the couch, and I stretched out on my side on the bed in the study, still listening to my CDs, and actually managed to drift off for a little bit. Then the contractions started to become stronger. Lying there I did begin to wonder what kind of intensity the sensations I was experiencing would build up to in the course of the night – and whether I would be able to maintain a peaceful and calm attitude toward them. Would I yet regret the fact I chose not to go the routine epidural route? At that point, I told myself, “This is the race I chose to run, and at this point I will just focus on running it the best I can. I won’t think about what other race it could have been.” With that, I felt like I was ready for things to really start happening: “OK, let’s run the race, then.”

I went to wake up Tara. We called the Birth Center and told Tiffany, the midwife on duty, that we were ready to come. Tiffany later said she was kind of doubtful as to whether it was time to come yet – I had been in labor for only three hours, and my contractions had only just started to be some 5 or 6 minutes apart. But I seemed certain that it was time, so she said OK. Having Tara there made me feel more confident, I think, in my own sense of what was going on, since she was supporting me emotionally and making me feel that she respected my own rhythm of birthing and my way of experiencing it. I went in to the bedroom and told Jacob what was going on. I said we’d call when the birth was imminent so he could come over with Maja.

We got to the Birth Center at 5 am and met Tiffany. The exam Tiffany gave me revealed that I was about 4.5 cm dilated. I settled in at the room in the Birth Center and thing really started to happen. I was no longer talking in between contractions, since the time in between them was getting shorter and shorter. I stood by a tall mantelpiece with my eyes closed, leaning on it with my arms and head during every contraction. I was still listening to my CDs and I was in the zone. During contractions, I swayed my hips gently from side to side. Tara held a hot pack to my lower back, since the contractions were building a lot of pressure there. Then Tara said the birthing tub was full and I could get in if I wanted. I got in.

Once I was in the tub, I was able to relax so completely, that the intensity built very quickly. After about twenty minutes, I was in transition. The contractions in these burning waves now – building, building, building – and they were long. In fact, they never really stopped. After the first one or two, I began to rock from side to side in the tub and to moan during the peaks, as well as let my legs kick out some. This was as much for the benefit of physical release for myself as to communicate to Tara and Tiffany that things were really picking up. The intensity was powerful, but I wasn’t really able to think at this point and consider how I was reacting or how I would handle it. I was just in the middle of it – like standing in a hurricane that was swirling all around me and through me. Then, all of a sudden, I really had to push.

I pushed for one contraction and Tiffany scrambled with her gloves, “Hold on, hold on – turn on your back, so I can catch the baby – OK? Can you hold back?” I just managed to grunt, “No.” “Do you want me to check if you’re fully dilated?” Again, I grunted, “No,” and I puuuushed. I didn’t even feel myself stretching, I just wanted to push so, so much. Tiffany said, “I can see the head – hold on!” But I couldn’t hold on at all. One more push, and a full head of dark hair popped out, followed by a long pinkish-bluish body. Plop – something was on my chest, and people were wrapping blankets around me. Tara took a picture, as I had asked her to. I was pretty stunned – a baby! Tiffany said, “What do we have here? A girl.” Isabel. My dark-haired night baby. I really realized only then that Jacob and Maja, whom Tara had called while I was in transition, did not actually get to make it for the moment of birth – it had happened so fast. It was only 6:45 am, and I had gone from 4.5 cm to pushing in one hour. Jacob and Maja arrived 10 minutes later to greet baby Isabel.