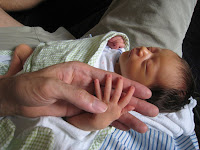 
The birth of my daughter began very slowly with two days of latent labor. On Tuesday I woke up to some signs of impending labor, and by midnight I started having mild contractions. They were small enough that I wasn’t excited about an imminent delivery, but strong enough that they interfered with my sleep. The next morning I called in sick to work and went shopping with my husband for some supplies in case that day was the day, although I didn’t think that was likely. I spoke with Tara by phone, and she told me to keep doing what I was doing – the process could take a while. But she also assured me that even though the contractions were small, my body was doing some very important work. It was reassuring to have her “with us” from at the very beginning.

Wednesday night the mild contractions continued, and I slept fitfully. On the morning of Thursday, August 12, I called my obstetrician to see if I should still go to my scheduled prenatal appointment, and she said I should come in. My doctor examined me and told me I was one centimeter dilated and ninety percent effaced. I was definitely in early labor, she said, but things could still take a long time. She asked if I wanted to come back at the end of the day so she could examine me again and let me know how I was doing. I had some reservations about a second examination as I thought it would be frustrating if my labor hadn’t progressed. I talked to Tara about this and she agreed, telling me to do whatever felt right. We went home and spent the day doing the same as we had the day before – reading, watching movies, eating, and getting fresh air when we felt like it. At this point I was convinced that it would be at least a few more days before anything happened, and I was prepared for the entire process to stall entirely and restart later. I was frustrated, but I knew I had no control over the situation. Little did I know my daughter would be born that day!

Later in the afternoon I did go to see my obstetrician again. I learned that I was two centimeters dilated and one hundred percent effaced. It still didn’t seem that encouraging me to me, however, because I didn’t really feel that I was “in labor,” but my OB said that she considered the fact that I was one hundred percent effaced to be significant. She also said that things could pick up quickly from now, but I was still prepared for a long wait. I just didn’t feel any momentum to the labor.

Back at home I practiced relaxing, stretching, and breathing through the contractions. As time passed I developed a constant backache that intensified during the contractions but didn’t go away when they ended. I took a warm bath to try and ease the discomfort which felt great. It was while I was in the bath that I started to really feel that I was in labor. At about 5:30, I told my husband to call Tara, update her on how I was doing, and see if it was time to come over to help me labor at home. Tara agreed that we should start thinking about her coming over, and I was relieved as it was exactly the time I started to feel that I really needed her support. After that I labored in the living room, bending over the couch with each contraction and moaning with my husband by my side, rubbing my back. I visualized myself opening up with each contraction and letting go. We had agreed that we would delay going to the hospital as much as possible, because it was more comfortable to be at home, but because I hoped to have as natural a birth as possible.

At about eight o’clock Tara arrived at our place. She was calm and smiling, and I took comfort in the fact that, though I was increasingly uncomfortable, everything I was experiencing was normal. She assured me over and over, “your body knows what to do,” and this definitely helped me to let go with each contraction. Soon after Tara arrived, I began to feel we should head to the hospital. Not only was I anxious to get to the place where my baby would actually be born, I was secretly thinking that then I could also ask for an epidural. We labored at home for about an hour, my husband and Tara helping me with each contraction. At about nine o’clock we headed to the hospital and arrived twenty minutes later. By this time I was really in the throes of labor. My husband pushed me in a wheelchair up to the labor and delivery floor. Once there, the nurses saw how uncomfortable I was and got me quickly into a room. It was at this point I turned to Tara and said, “I want an epidural.” She calmly and gently reminded me that most women hit a wall at some point in labor, and I was hitting mine. Though I had asked her to help me go without pain medication, I wasn’t happy to hear this. But somehow I managed to trust her and focused on managing the next contraction and adapting to my new surroundings. Tara helped by minimizing the number of people in the room, dimming the lights, and simply remaining calm and present.

My initial exam revealed that I was six centimeters dilated. Everyone said how great this was, but I felt I should be more like eight centimeters by that point. Being up on the bed was at first uncomfortable, but after a while I got used to handling the contractions lying down. I remember that a few were so bad, I broke from the low moans and let out some higher-pitched screams. Tara coached me back to vocalizing at a lower register and kept me as calm as possible. I remember again saying that I couldn’t do it. Tara and my husband kept telling me that yes, I could do it, and that I was doing it. Then the three of us would deal with the next contraction. That’s how we got through transition – one contraction at a time.

At around eleven, the doctor did another exam and told me I was fully dilated. I was so relieved I think I cried a bit, or at least felt like crying. A few minutes later we began pushing. All along, I had been most frightened of this stage because I couldn’t imagine how a baby could pass out of me without huge amounts of pain. But ironically, it felt good to push because it was relieving a lot of the pressure I was feeling and putting the contractions to use. The pushing went quickly – half an hour after we started my daughter was born! I remember opening my eyes, looking up, and seeing the doctor hold her up. The next thing I knew she was on my stomach, and I held her to me. I will never, ever forget the moment she opened her eyes at looked at me. That was really when I saw my daughter for the first time – her eyes said everything. We named her Sachi, a Japanese name meaning “happiness.”

Soon after, I delivered the placenta, and had a small tear stitched up. As we had planned, Sachi stayed on me the entire time, except for a few minutes when she was weighed and swaddled. Though there were several medical professionals in the room, they gave us a lot of space. Sometime after midnight Tara helped us start breastfeeding. I was grateful for her guidance; there was no pressure to get it “right” on the first try. Sachi proved to be quite a determined baby, and attempted to latch over and over. We didn’t perfect our technique right away, but later that night Sachi wanted to eat again and that’s when we had our first successful feeding.

I honestly never really thought I would have a completely natural childbirth. I just knew I wanted to participate as actively as possible in my labor and to avoid most medical intervention. But generally, I was simply open to whatever seemed right. I was completely confident that Tara understood our wishes and would do all she could to make them happen. In the end, things turned out better than I had hoped. With the help of Tara and my husband, I was able to experience birth at its full intensity. It was extremely difficult and at times terrifying for me, but it ended up being one of the proudest moments of my life, and certainly the happiest.
Posted by Tara Kenny at 7:11 AM No comments: