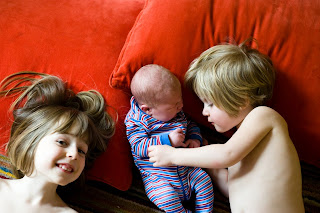 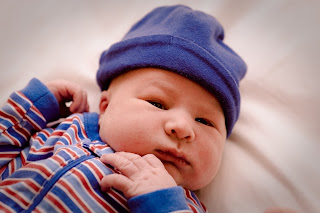 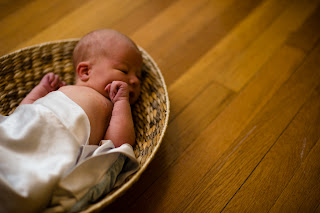 
At 4am on Saturday morning I woke up having somewhat regular contractions. I was a few days past my due date and fully expected this to be it. My In-Laws planned to come right away and take the girls out. By the time I had breakfast the contractions had slowed down and I began to suspect we'd be waiting a little longer. Contractions continued on and off all day. The girls spent the night with their grandparents and Lee and I had a nice quiet evening to ourselves.

I spent that whole night and into Sunday morning having contractions every 5-10 minutes and dozing off in between. I had been through this before and was pretty relaxed about it but when things hadn't changed much by morning I began to get a little discouraged. I was tired and didn't know how much longer I could hold on. I had early labor contractions with my first that lasted about 4 days and ultimately ended in a c-section. Even though my second was a home birth and the labor had been completely different I still held onto the memories of that first experience.

Tara and I spoke on the phone a few times and she reminded me that all labors are different. I knew she was right but we really wanted our baby!

I spent Sunday having contractions and tried to rest as much as possible. I knew that I would need the energy. I didn't really try to encourage labor. That might sound weird but looking back I think I was right to follow my instincts. I knew that if I was really in labor I couldn't slow it down but if my body was still just preparing then I should take advantage of the opportunity to rest.

The only slightly crazy thing I did (in hindsight of course) was take a trip to Whole Foods with Lee! We needed some groceries and I wanted to get out for a bit. I had to have him pull over for a few contractions and waddling around the supermarket wasn't very comfortable but I think it may have convinced me that labor was imminent. Or did it?

I guess after all those early labor contractions I still questioned whether or not I was really in labor. By late afternoon my In-Laws had left and my parents had arrived. I continued having contractions and resting. At around 6pm the contractions were stronger and I found myself unable to sit still. Everyone was eating dinner but I was feeling queasy. I walked around the apartment and leaned on a windowsill during each contraction.

During the next 45 minutes the contractions we even stronger and coming every 2-3 minutes. Still not convinced this was it...but had Lee start getting the tub ready just in case. I waited a few more minutes before calling Tara. She said she'd make her way over within an hour. I hung up the phone and with the next contraction my water broke. I called her back right away and she said she was on the way.

I was very excited that my water broke. Now I knew this birth was really going to happen and soon! My parents started getting the girls ready to go with them. With all the activity in the apartment my bathroom felt like the most comfortable place to be and I spent the next hour or so having very strong contractions in there. First standing in the shower holding the curtain rod (it was sturdy!)...learned that position from Ina May and it was a good one!

Then I moved onto all fours and leaned over a birth ball on the floor. The contractions were so strong. Lee was setting up the tub and sat with me when he could. Tara and Audra had arrived by then and were setting up and coming to see me as well. They reminded me to breathe during the contractions and just let them happen. My body's instinct was to fight the contraction and I had to work at relaxing and letting the contraction do what it needed to do. The short breaks in between were such a tremendous relief and allowed me to prepare for the next one.

With one of the contractions I suddenly felt like I was pushing and I really wanted to be in the tub. It was still not at the ideal temperature but we decided I could still get in. I couldn't believe I was already pushing. I was really so happy this was finally happening and my physical reactions to the pain were not in my control. I really trusted my body to do what it needed to do and it needed to yell!

The room was dimly lit and I felt totally safe and calm. When his head was finally out we waited for another contraction so I could push out the body. I tried to push without one but I couldn't. Audra told me to get on my hands and knees and push...he was a big boy and was maybe a little stuck. Tara and Audra were timing how long his head had been out but everyone was still calm and I never worried. I knew he would be out soon. And with the next contraction I was able to give one last push and he was here. They said, "pick up your baby!"

I scooped him right up...he was slippery and gorgeous and it was all over. 8:39pm. Overall a very quick labor!

I love all three of my birth stories because each has been so different and empowering in its own way. While we are 99.9% sure we won't have a fourth baby I know when the time comes it will be hard to decide if 3 is really "it." Each child, pregnancy and birth affects you in so many ways it's hard to say you're every really done! 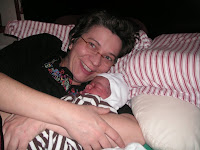 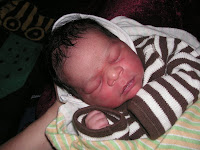 Here is what Ina had to say about her experience:

During my third pregnancy my previous dream of having a home birth was nagging on me more and more as my due date came closer. My previous children were born naturally and unmedicated in an outpatient setting back in Germany. I liked to be able to go home a couple of hours after the births to recover in my own bed. But having to drive to the hospital during my short labors and being in an unfamiliar setting during the births really bothered me a lot.

I started talking with my boyfriend Cesar about the possibility of a home birth, especially in a for both of us foreign country (he is from Congo) with all the terrible stories of interventions, c-sections and being pushed into something I would not want for myself and our baby. I believe a baby should be born at home were it is conceived. I also very strongly believe, that a woman's body is totally capable and made for receiving, growing and birthing babies without intervention.

Cesar was very skeptical about the idea. He believes in natural childbirth, but he also thought a hospital setting would be the safest place to deliver his first baby. We decided on a birth center as a compromise but I still kept working on changing his mind. When we finally met Tara, at week 32, she explained with confidence what will happen during and after the birth, about her training and about statistical outcomes of home births. Cesar felt secure enough to commit to a home birth. I am so thankful for Tara's influence on his decision.

The birth itself was fast and smooth. Tara and Ann are both great midwives and have the right mix of humor, focus and encouragement during and after the birth. They both managed to give Cesar tasks to calm him down (there were times were he questioned his decision) and they gave me the space and support I needed. After Ndoga was born the joy and peaceful atmosphere was a great experience compared to my previous births. And my son, Gino, was involved cuddling and checking out his new baby brother right away.

Cesar and I felt safe and comfortable at any time during my pregnancy, the birth and postpartum and Tara is a great resource for all the questions Cesar had as a new father. She is also very sensitive to cultural differences and open minded for different views on things.

Thanks Tara (and Ann) for sharing this important time for us as a new family ;-)
Posted by Tara Kenny at 5:33 PM No comments: 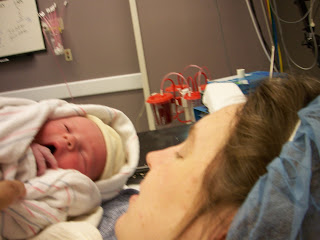 One of the most positive c-section births I have attended. Baby Rowan wanted to stick to being in a footling breech position so instead of a home birth we went to the hospital.

Here are some sweet words that my midwifery clients wrote: We are so glad that Tara was part of our birth experience. We worked with Tara to prepare for a home birth but as our due date approached with our son in a footling breech position, Tara helped us accept the reality that our baby would be born in a hospital. Tara seamlessly transitioned to providing doula services for us, and gave us the continuity, support and advocacy we needed in the hospital setting. Tara's prenatal care is top notch. Our choice to have a homebirth was met with some skepticism from family, but meeting Tara and attending a prenatal visit erased their worries. Tara is extremely knowledgeable and capable, and more importantly, supported our informed decisions. Pregnancy was a beautiful, empowering time for me, and though we didn't have the birth that we had planned and hoped for, it was exactly what we needed it to be. –GD
Posted by Tara Kenny at 5:08 PM No comments: 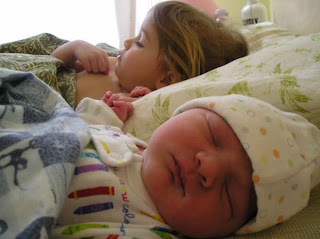 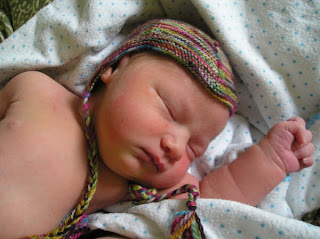 Baby Oona was born at home to parents, Danielle and Brendan. This was by far the fastest labors of all-1 1/2 hours long. She is a sweet, strong & mellow baby. Congratulations to big sister Rosa!

Posted by Tara Kenny at 4:58 PM No comments: 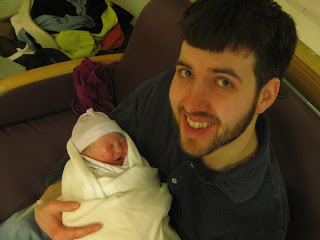 Proud parent's Brenda and Paul welcomed their baby girl-Amelie just before Valentine's day. Brenda did an amazing job laboring. I thought that the baby might have been born on the way to the hospital! Good thing I know how to deliver them.
Posted by Tara Kenny at 11:47 AM No comments: 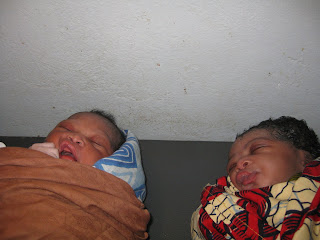 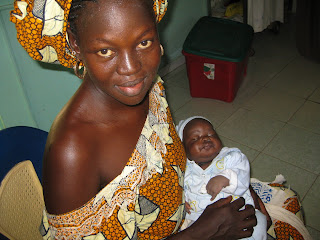 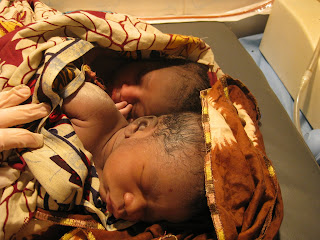 I decided that I needed to get out of the country and learn about birth in Senegal for three weeks. I went with a group called "The African Birth Collective." Their website is www.africanbirthcollective.org. Here are some pic's from that amazing trip!
Posted by Tara Kenny at 11:20 AM No comments: 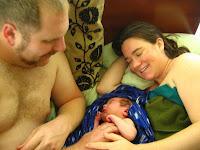 Jessie Groneman and Andy Toomajian welcome sweet baby Llewyn to their family. He was 10 # 4oz. and born in the water. It was a very sweet home birth. A joy for me to attend one of my dearest close friends birth:)
Posted by Tara Kenny at 10:29 AM No comments: 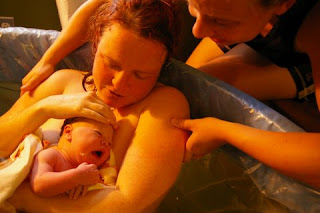 Congratulations to Lissa Harris for giving birth to Ruby! She did a fantastic job and had a beautiful water birth during an intense rain storm in the comfort of her own home.